Too many of us are quietly, privately, hard on ourselves. We walk around with an inner critic, telling us we’re not ‘good enough’ and never amount to anything.

Sometimes we feel so much pressure to achieve, self-criticism seems like a necessity. Lockdown has kept us cooped up and in many cases with more free time. We may feel especially guilty if we’ve not been ‘productive’.

We’ve all seen people who ‘achieved’ despite the difficulties of the pandemic. Marathons run in backyards, new languages learned, what seems like hundreds of books read. It’s difficult not to compare ourselves and put pressure on ourselves too.

There’s a myth we can hang on to that a harsh inner critic is useful to get where we want in life.

In this article, you will find:

Talk to one of our clinicians 1 :1 online through our text-based webchat if self-criticism is becoming a problem for you.

Self-criticism is a very common experience

However, self-criticism is rarely useful. Realising that reduces its influence on you.

The good news is, there is an antidote. First, you need to understand how and where your self-criticism comes from. 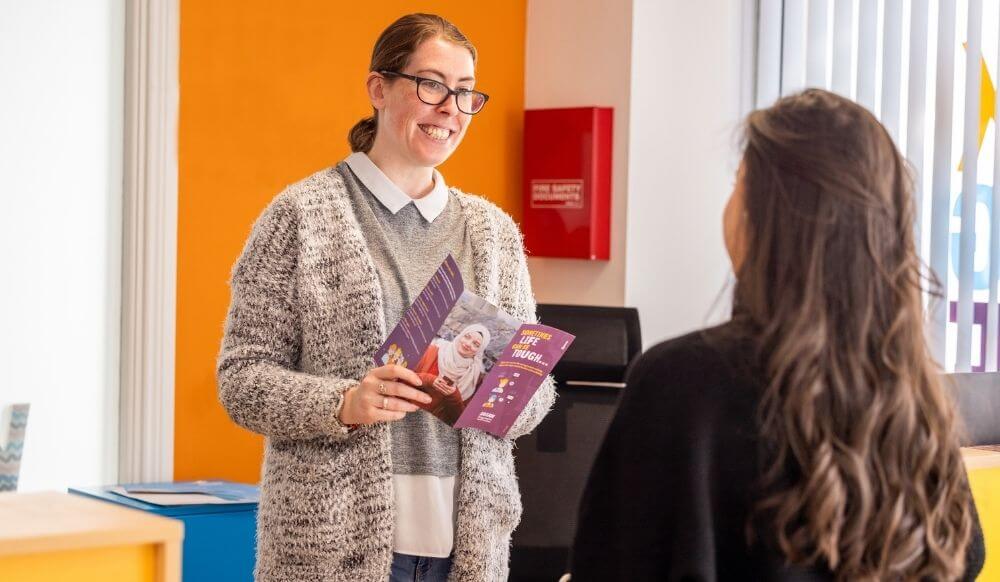 Self-criticism, and our inner critic, often have an underlying theme that we are not enough.

What is an inner critic?

We all have inner monologues. That little voice that narrates your life, reminding you to do things and probably warning you not to do others.

When an inner voice gets critical of you and your actions, it can sound sarcastic, angry, disappointed, or pessimistic. It can also just be mean. Self-criticism often has an underlying theme that we are not enough. Maybe for you, it’s not good enough, not smart enough, not pretty enough, not talented enough, not [fill in the blank] enough.

Sometimes self-criticism is so rooted in our way of thinking, we can’t tell the difference between the self-critic and our real point of view. This way the negative thoughts can become facts in our minds.

When we’re in a challenging situation or one that causes self-doubt, our inner critic can escalate. Some young people don’t even realise it’s there.

It’s like talk radio in the background, chattering away.  A channel that always seems on. It can get so familiar, we can be unaware enough to stop and question it. Most importantly, we don’t change the channel.

This animation was developed for us by students in the Institute of Art, Design and Technology in Dún Laoghaire, Co Dublin. It outlines how we can be our own worst enemy with negative self-talk and ways to change that.

The problem with self-criticism

Self-criticism can seem like it’s there to motivate you. At one point, it may have been a motivator and proved to be an effective tool. But if you’re reading this, it has more than likely spilled over into other areas of your life, becoming destructive rather than constructive.

Maybe you think that inner critic voice will drive you to run faster, study more, try harder, perform better, etc. A motivating, encouraging voice is OK. The problem is when we become overly harsh with ourselves.

Studies show self-criticism can reduce our chances of achieving our goals and can actually slow our progress. Critical self-talk can crush motivation. It can lead to procrastination and slow us down. Negative self-talk can drain our energy and damage our self-esteem.

When you tell yourself you’re going to mess up, you’re creating a self-fulfilling prophecy.

In Jigsaw, we work with young people to listen to and challenge their inner critics.

In Jigsaw, when we support young people whose self-criticism affects their wellbeing, we ask them to try understanding their self-critic better. 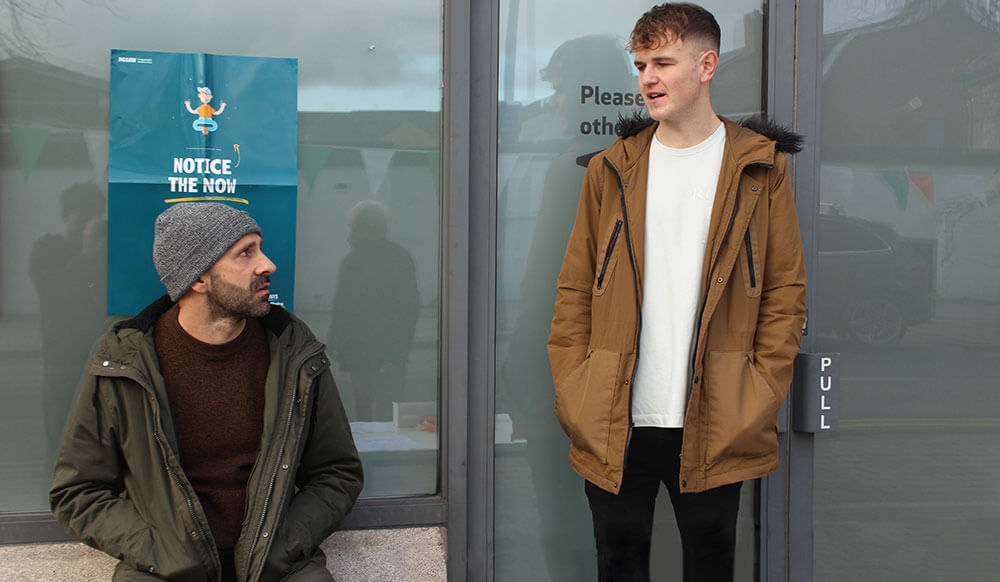 Understanding where self-criticism comes from

“You didn’t lick it off a stone” is a great Irish phrase. It means we are influenced by people around us, those we grew up with and those we share genes with.

In Jigsaw, when supporting young people whose self-criticism affects their wellbeing, we ask them to try understanding their self-critic better. That usually means asking, who does it sound like?

Does it speak like someone who bullied you in school? Does it remind you of an overly critical parent or relative? A harsh teacher? Or someone you had a difficult relationship with?

Some young people found when they were younger, their parents or a teacher used harsh words to get them to do something. These early experiences leave an impression. We can think we need to be really hard on ourselves to get stuff done, or at least meet other people’s expectations.

Borrowing someone else’s critical words or attitudes and adopting them as our own is called internalising. There are times we have good reason for doing this. It can help us predict an attack, and give us the chance to avoid it. Self-criticism can be developed by trying to protect ourselves.

If this sounds familiar, be aware you don’t want or need an inner critic in your ear for your whole life. There are ways to turn down the volume on it. Recognise it is there, and where it came from. This should already reduce its power.

Vanessa
Jigsaw Clinician
We need to learn how to be kind to ourselves and listen to what we're saying to ourselves. Are we saying things to ourselves that we would never say to somebody else?

The great antidote to self-criticism

The opposite of self-criticism is self-compassion.

Treating yourself with kindness and empathy is self-compassion. When a friend is worried or in trouble, we can usually find some kind and wise words to say. The trick is to find those words for ourselves.

Self-compassion replaces the shouty sergeant major with an encouraging coach who cheers you on. The coach recognises your effort and never compares you to others.

Instead of finding fault, the coach says ‘you are doing your best’, or ‘you’re making great progress’. If you want to improve something but don’t have time, your coach reminds you that ‘you are focusing on more important things right now’.

Practicing self-compassion isn’t permission to give up, let yourself off the hook, or blame other people. Instead, self-compassion is speaking to yourself with a different voice. The voice understands you have flaws like everyone, but are doing your best. It is accepting that each person is a work in progress.

There are ways to tweak how you speak to yourself to be more compassionate.

Exercises for dealing with self-criticism

Phrases to say to yourself

You’ve probably heard of self-confidence mantras or positive affirmations. At first, they might sound silly. But we all need them in our arsenal when self-critical remarks start getting us down.

Try saying these phrases to yourself using your own name at the start:

“You are doing your best”

“You’re doing better than you think”.

Replace ‘should’ with ‘could’

Replace ‘should’ with ‘could’

‘Should’ is a word that can be limiting and leaves no room for compassion or context.

“I should have studied more for that exam. I’m such an idiot”

“I could have studied more for that exam. But I was so tired from work the day before I couldn’t stay up late to cram. Next time I’ll swap my shift the day before a test.”

Self-critical thoughts are rarely true, and often overly harsh. When you hear these thoughts, pause, and calmly ask for evidence.

If you think, “I’m a total idiot and will mess up this exam/game/project,” respond with “let’s look at the evidence”. On a piece of paper write down all the proof you have that points to failure.

On the other side of the page, list all the evidence against it. For example, you can list other exams you passed. Or the fact you were given this project or place on the team, to begin with.

Now, sit back and look at the evidence on both sides. That should give you a more rational and clearer view. If there are obstacles ahead, plan how you are going to tackle them.

If you’re too overwhelmed to do this exercise yourself, ask someone to help you.

Other tips for dealing with self-criticism

Take the power out of the voice

When you recognise your inner critic chattering away, don’t tell it to go away. Instead, change its voice to an annoying cartoon character. Make it sound like Kermit the Frog or SpongeBob and it will sound ridiculous. This can make it hard to take what it’s saying seriously.

If you never meet goals and are not happy with achievements, you could be deliberately setting standards too high to meet. This is called perfectionism. It is a form of self-sabotage and can cause great unhappiness in the long run.

Look hard at the expectations you have of yourself. Are they realistic? Where are they coming from?

Try to break these down and learn to live with flexible expectations.

A negative body image can have an impact on our mental health. Learn about body image and building body confidence.

Life can feel full of pressure sometimes. Check out these tips from Jigsaw clinicians on coping with feeling pressure.

We live in a competitive world, where comparison is everywhere. Find out ways to cope with the pressure around being the best.